The Chinese government has put in great efforts to establish a low carbon economy as the leading strategy to reduce greenhouse gas emissions (GHG). With this goal of a low carbon economy in mind, there has been an increasing demand for research focusing on the development of these economies, especially regarding the small cities and towns with large GHG emission potentials.

This research took place in Fuding and Zherong in Ningde City, Fujian Province. In both of these locations, there is no evaluation system put in place to review each economic sector’s emissions. Fuding and Zherong are both entering the phase of rapid economic growth, therefore having an indicator system to evaluate GHG emissions is critical for the future of low carbon economic development. Therefore this study has chosen to focus on Fuding (small city) and Zherong (small town) in order to facilitate the transition to a low carbon economy. 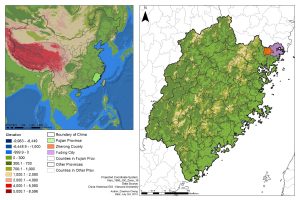 Map of the study area highlighting Fuding (in purple) and Zherong (in orange).

To fulfill the specific objectives of this project, a literature review was conducted to collect information on current regional low carbon development in the world and existing low carbon economy indicator systems. Following the literature review, a Survey to assess public awareness was released and the results were analyzed. A comparative analysis of the results from each city was conducted to determine the preliminary GHG emissions and mitigation potentials. With the above information, the development of a low carbon evaluation indicator system was researched in the literature and developed. Lastly, a literature analysis and evaluations of the low carbon development status in the research area was completed to suggest recommendations for future low carbon economic development and planning.

The entire project was completed in two and a half years with the following schedule:

Low carbon economies have been proposed in different areas in the world as a strategy to mitigate climate change. As the world’s largest greenhouse gas (GHG) emitter, China has put many efforts into developing a low carbon economy as their primary strategy to reducing GHG emissions (Sustainable Development Research Group of Chinese Academy of Science (CAS), 2009). However, there is very little attention to small cities and towns. This research project aims to fill the gap, facilitate a process for raising public awareness and planning for low carbon economy development in small cities in China. It includes three parts: a survey on public perceptions of low carbon economies, a preliminary estimate of carbon emission from 2009 to 2013, and development of a low carbon indicator system that evaluates current states, pressure, and progress of low carbon economy development. The main findings are summarized as follows:

Results indicated several possible knowledge gaps and inconsistencies about climate change and the low carbon economy among citizens. However, citizens did indicate high levels of support for developing a low carbon economy in local areas. One-way ANOVA indicated that supporters of low carbon economies were significantly more knowledgeable about climate change and LCE, and they tended to be more supportive of related policies, such as introducing carbon tax on the use of carbon-intensive products than those who were against or not sure about developing a low carbon economy in local areas. There was also evidence suggesting that people who received higher education tended to decide whether or not they support low carbon economies, instead of being unsure about it. However, greater knowledge and more supportive attitudes did not necessarily lead to behavioural changes. This research discovered an ‘attitude-behaviour’ gap between someone showing greater support for low carbon polices (e.g. developing a low carbon economy) and having less intention to change their behaviour (on average respondents had tried three to four low carbon activities and were willing to conduct one more low carbon activity to further lower their carbon footprint). Significant differences were found between the study areas and between different sub-populations, which suggested priorities for further engagement and social learning among the populations of smaller cities in China.

Carbon emission of both Fuding City and Zherong County were estimated based on their economic sectors (i.e. GDP of primary, secondary and tertiary sectors) and total energy consumption (coal, petroleum, natural gas, hydroelectricity, and nuclear energy) respectively. Our calculations indicated dramatic increases of carbon emission in both places from 2009 to 2013. Fuding City had a much higher carbon emission in total that increased at a much faster speed. From 2009 to 2013, Fuding City’s carbon emission had doubled from 1,877,621 tonnes to 3,996,609 tonnes (average increase rate = 453,800 tonnes/year), while Zherong County’s emission increased by 50% from 410,769 tonnes to 648,589 tonnes (average increase rate = 47,600 tonnes/year, one tenth of Fuding’s rate). Secondary sector has the most carbon emission, accounting for over 75% of the total emission in both areas. Over 90% of emission from secondary industry is from manufacturing activities.

Results indicated moderate increases of forest land (4% of the total area), agriculture land (4%), and impervious land (less than 1%) in Fuding City, while grassland (8%) and waterbody (freshwater; less than 1%) decreased gradually during 2000-2015. Zherong County also had increased forest land (10%), agriculture land (1%), and water body (freshwater; 2%), but decreased impervious land (1%) and grassland (4%) over the same period of time. Although forestland with positive contribution to carbon budget increased in the study areas overtime, both areas were carbon deficits (i.e. carbon source) due to rapid urbanization. 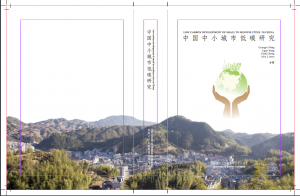